Florida-based label Greyhaze Records is proud to announce the signing of a reissue agreement with Brazilian Black Metal act MYSTIFIER.

The agreement will involve the repressing of two classic albums by this cult band. The albums in question are Wicca (1992) and Goetia (1993). Long out of print, both albums will be reissued by Greyhaze in different formats, including deluxe CD/DVD digipaks of each album as well as deluxe vinyl versions. The releases will feature rare photos, bonus audio tracks, videos and other band information.

The first release of the MYSTIFIER reissue series will be a CD/DVD digipak version of the album Wicca. The audio portion of this release will feature, aside from the full album, bonus tracks exclusive to the Greyhaze Records reissue. The DVD will contain two full concerts by the band – one filmed in Germany during the Nuclear War Now Festival and the other in their hometown of Salvador, Brazil. A vinyl version of the album is also to follow. Release dates are scheduled for 2013 and will be announced shortly.

“We are proud to license our first two albums to Greyhaze Records. Thanks to the support from the international underground, those two albums have become true hallmarks of Black Metal worldwide.”

MYSTIFIER is slated to play three dates in Mexico this November. Plans are currently being made for the band to cross the border for an American invasion as well. Stay tuned for details. 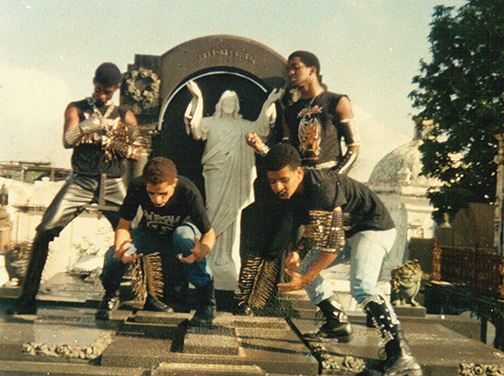 MYSTIFIER comes from the city of Salvador, in the state of Bahia, Brazil, and plays a style of Black/Death Metal, influenced by old Underground bands like BATHORY, SEPULTURA, SARCOFAGO, POISON and VULCANO. The band has been active for over 20 years and has released four studio albums as well as special editions. The Greyhaze reissues will mark the first time MYSTIFIER albums will be officially released in standalone format in the United States.