On June 17, LEGION OF THE DAMNED startet their first tour in South America with playing shows in Brasil, Argentina and Chile entitled “South American Werewolves”! It was a major experience and big challengefor the band, but the resonance was amazing. Now, after this succesful South American tour, LEGION OF THE DAMNED are back on european ground, and excited to promote and release their upcoming album “Ravenous Plague“. The band would finally like to reveal the songtitles of their already 6th silvered destroyer, to be released in january 2014, once again produced by no one less than Andy Classen at the Stage One Studio in Germany: 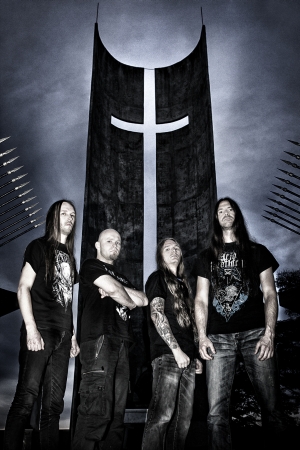 The band is also proud with having Jo Blankenburg exclusively working on their new album´s intro. Jo Blankenburg`s tracks have been used in advertising campaigns of major hollywood feature films such as The Hunger Games, Harry Potter, X-men, Lincoln, Hitchcock, The wolfman and How to Train your dragon. Jo also won the MTV Europe songwriting contest.

The band will only do a handful of selected festivals in 2013, where they will perform with second livesession guitar player Hein Willekens. The band will play 1-2 new songs at Wacken Open Air, Party San Open Air and MetalDays.

After some setbacks faced in 2012, for example Richard leaving the band and ex former bassplayer Twan Fleuren committing suicide, LEGION OF THE DAMNED will be back, stronger than ever!!