We’re really proud to announce you that LEGIONS OF WAR are BACK TO THE FRONT !

4 years after their tremendous & merciless surprise attack entitled “Towards Death” in 2009 which took no prisoner (and highly acclaimed by underground medias that compared the bands to such monsters as DESTROYER’666 or GOSPEL OF THE HORNS !) – and their self-released thunder assault “Riding With The Blitz” (an EP with two new tracks in 2011) – swedish warmongers LEGIONS OF WAR come out from their long retreat with a new arsenal to take the world by storm ! 9 new missiles made in the strongest steel with an incredibly precise strike force will soon be unleashed on INFERNO Records under the name “Forced To The Ground” !

This new armada shows a more aggressive and still heavier side of LEGIONS OF WAR ! Guitar riffs cut like scalpels, rythmics are like hammers coming down in a relentless manner, vocals are raw & scorched (but still very clear, no growls or grunts… or hysterical screams) and express all the atrocities of war like never before… The style is basically THRASH with a very personal approach (the whole concept is about WAR, which means the sound is very cold) but has definitely a strong HEAVY-METAL influence… Guitar solos are the undeniable proof as well as somme acoustic parts that will make your blood freeze ! 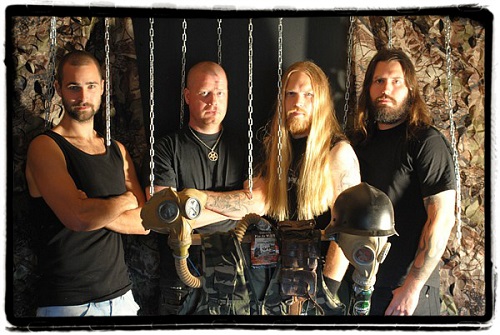 This new assault will be effective by the end of the year (release date is set for December 20th, 2013) under the forms of Digipack CD, regular jewel case-CD and cassette – and will for sure please all fans of bands like DESTROYER’666, GOSPEL OF THE HORNS, KREATOR, SODOM,

Two new songs are now available for streaming on SOUNDCLOUND :

A promo-video for “Forced To The Ground” will soon be available for streaming too – stay tuned !

For more informations on the band > www.legionsofwar.se“

LEGIONS OF WAR – Honour to the Past EP