LEPROUS, the extremely active and much acclaimed prog metal newcomer-sensations from Norway, are still nowhere near to be taking a real rest from promoting their current album “Bilateral”, which was released last August via InsideOutMusic.

After a highly successful 41 dates all across Europe supporting Amorphis as well as dates in Japan together with Ihsahn and The Haunted, LEPROUS are now happy to announce a full headlining run of Europe for October 2012, where the band will finally be performing their full set for their enthusiastic followers.

LEPROUS will be joined on this special tour, much suitably dubbed “European Progressive Assault”, by Sweden’s Loch Vostok (www.lochvostok.com), Norway’s Ørkenkjøtt and another support act, yet to be announced. Here are the dates revealed so far: 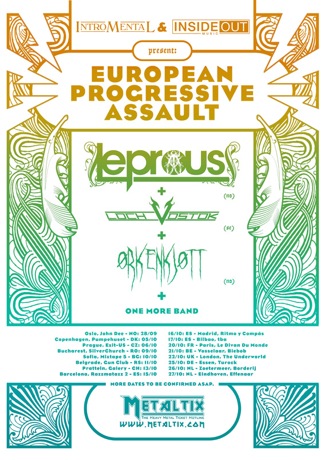 LEPROUS have checked in to comment on the tour as follows:
“We are very proud to announce our first headlining tour. We can’t wait to get back to all the beautiful European cities where we’ve played support shows before, this time as a headliner. We promise to deliver an intense, powerful and a soulful show in a city near you!”

Previous to the European headlining tour, LEPROUS have also already been confirmed and announced to appear at some selected single shows and festival events, including UK’s Fused Festival on May 26th, 2012 as well as the prestigious Graspop Metal Meeting in Belgium on June 23rd, 2012, next to heavyweights like Ozzy Osbourne, Limp Bizkit, Guns N’ Roses, Motörhead, Slayer, Machine Head, Megadeth, Twisted Sister and many more.

Here is a list of all other upcoming shows:

The promotional video clip for the song “Restless” off the band’s acclaimed “Bilateral” album can be seen here: http://www.youtube.com/watch?v=986iAyQpr1U

Check out a tourblog from the previous European run with Amorphis here:
http://leprousband.blogspot.de 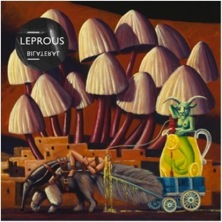 “Bilateral” was skillfully mixed and mastered by Jens Bogren at the Fascination Street studio (Opeth, Devin Townsend, Symphony X, etc.).
The album features cover artwork by the Surrealist Jeff Jordan (www.jeffjordanart.com), who has also worked for The Mars Volta and many more.

Hot News: Leprous – Second leg of the European tour underway; Video message from on the road!