We are proud to announce the signing of Northern Californian progressive metal instrumentalists ABNORMAL THOUGHT PATTERNS to the Lifeforce Records roster.

In 2008, Jasun wrote and recorded the 12-minute instrumental “Velocity and Acceleration,” the track that would ultimately lead to the founding of Abnormal Thought Patterns. Upon hearing the song, Troy expressed his desire to put together an instrumental band. The Tipton brothers looked no further than longtime drummer and friend Mike Guy to provide the rhythmic foundation for ATP. The three members then headed to the studio and tracked seven songs for CynNormal Lab Recordings. 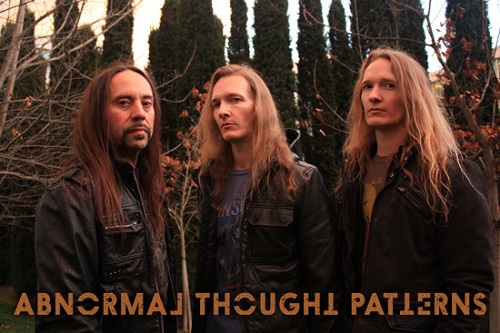 Prior to forming ATP, the trio was for many years the backbone of prog-metal powerhouses Zero Hour, releasing five albums, including the landmark 2001 epic, “The Towers of Avarice.” Michael Rensen of Germany’s Rock Hard magazine proclaimed, “Zero Hour is one of the five Best Progressive Newcomers in the late ’90s!” This and other accolades landed Zero Hour gigs alongside such notable bands as Opeth, Cynic, Symphony X, All That Remains, The Human Abstract and Liquid Tension Experiment, in addition to multiple successful European tours and three appearances at America’s premier progressive metal festival, Prog Power USA. The Tipton brothers have also been guest columnists on the popular guitar enthusiast website Chops from Hell, and have released two instructional videos.

Lifeforce Records CEO about the signing of ABNOMRAL THOUGHT PATTERNS:

“It is definitely not the easiest to go through a huge pile of demos and nothing can better describe it than what Season Of Mist founder Michael Berberian just recently said “…That’s the equivalent of Mordor – a dark place where we don’t usually go unless we really have to….”, however I made my way through and it was that not very substantially looking demo that caught my attention after the first few tunes… Thank god (or whoever was responsible for) that I listen through pretty much everything being sent to Lifeforce… I’m still blown away by the sheer technicality these guys have in their fingers and I truly believe the Tiptons are guitar mutants! :)”

Jasun Tipton comments:
“We’d like to thank Lifeforce for this awesome opportunity. The band is very pleased with the new material as “Manipulation Under Anesthesia” is truly the thoughts and sounds of Abnormal Thought Patterns.”

ABNORMAL THOUGHT PATTERNS‘ Lifeforce Records debut “Manipulation Under Anesthesia” is set to be released in spring 2013.