We’re very proud to introduce prog metal mongers THE OMEGA EXPERIMENT !. Very few of the younger bands have shown so much enthusiasm and passion for the music they enjoy listening and playing with so much professionalism and we fully support that !.

Michigan’s THE OMEGA EXPERIMENT describes their sound as ‘heavy guitars, euphoric synths and rich layered vocals come together to create a wall of progressive rock lushness.’ and was founded by duo Dan Wieten and Ryan Aldridge.

Like their fellow modern prog artists, The Omega Experiment create a massive sound with home equipment and have no fear of experimentation and rule breaking.

The guitars are big and technical and layered with keyboard sounds reminiscent of Dream Theater and Queensryche. The vocals range from powerful lead lines, big harmonies and demonic screams in the vein of Devin Townsend and Mike Patton. 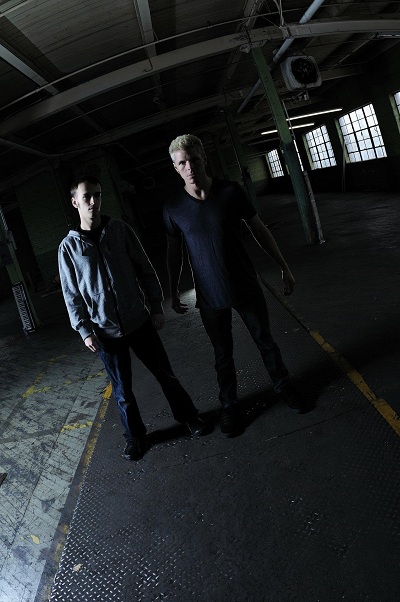 The band’s inspiration comes from Guitarist and Vocalist Dan addressing the last 10 years of his life, focusing on his excess and drug abuse which took him to a dark place and his determination to move onto a brighter future.

THE OMEGA EXPERIMENT has been lucky enough to receive public praise from Devin Townsend on multiple occasions, most notably on his Twitter account the night they unleashed their “Karma EP” to the masses for free on Bandcamp, saying, “Actually listening now…great great work man! Seriously great stuff Dan, I fully back it and appreciate the effort you’ve invested I wish all luck!” The EP later went on to receive over 2000 downloads.
The band released their self-titled debut album was mastered by Acle Kahney (TESSERACT) and made available digitally via bandcamp, itunes to much critical acclaim.

THE OMEGA EXPERIMENT will see the re-release of their self titled debut album in late February in Europe and March in the U.S. on Listenable .
The band is currently at work writing their next album and look forward to getting back out and touring, with a strong hope to be able to reach their fans in other countries.