The band are currently in the studio putting the finishing touches to an album entirely of new material written over the last 18 months. This is the culmination of a process that began when the original ‘Court In The Act’ album line-up got together for an exclusive ‘one-off’ re-union show at Germany’s ‘KEEP IT TRUE’ Festival last year.
This line-up had not performed together in 28 years! The band were somewhat overwhelmed with the response – 10 minutes into headliners ‘Crimson Glory’s set, the crowd could still be heard chanting Satan! Satan! Satan immediately booked more shows in Germany, Holland, Belgium, & London, and have since kept in close contact with each other, writing songs and making demos. 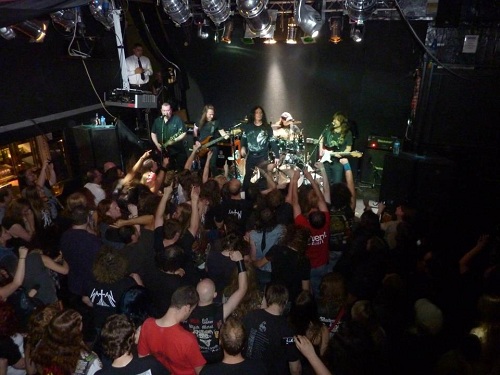 The new album, to be titled ‘Life Sentence’ is scheduled for release March April 2013. The full track listing is as follows: ‘Time To Die’ ‘Twenty Twenty Five’ ‘Cenotaph’ ‘Siege Mentality’ ‘Incantations’ ‘Testimony’ ‘Tears Of Blood’ ‘Life Sentence’ ‘Personal Demons’ ‘Another Universe’.
Fittingly, this will mark the 30th anniversary of their greatly acclaimed debut ‘Court In The Act’.