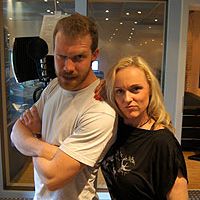 Liv Kristine’s upcoming album (scheduled for a fall 2012 release) will feature a duet with German singer Tobias Regner, the 2006 winner of “Deutschland sucht den Superstar”, a German music talent show in the vein of “American Idol”. The track is called “Vanilla Skin Delight”!  Liv Kristine comments on the collaboration with Tobias.

I’ve got news for you! Last week we recorded male vocals for the track “Vanilla Skin Delight”. Our special guest is Platinum-Gold-awarded artist Tobias Regner!
His voice just fascinates me, and as soon as we had made the decision that we would want a male singer on ‘Vanilla Skin Delight’, I thought it would be just perfect having Tobias’ powerful and warm voice completing this composition, i.e. turning it into a real rock song duet. Fortunately, our friend and movie-maker Konrad Hollenstein was able to provide us with the necessary contact information, thus we were able to get hold of Tobias the very next day. 48 hours later Tobias knocked on the door and I was very happy and grateful that he had found his way to Mastersound Studio. We realized straight away that we have so much in common (sports, both being born on the country side, good and bad experience with the music business, touring, red-wine, art…), despite the fact that we come from completely different musical backgrounds: Tobias winning “Deutschland Sucht den Superstar”, the German version of Pop Idol, in 2006, compared to my own revolutionary beginnings with Theatre of Tragedy in the nineties. Here we are, being duet partners in the same song, moreover, it felt like we had known each other for a long time. Tobias is a very open-minded, warm-hearted and fine guy, with whom I really would like sharing stage with sometime in the future. He is a fantastic rock singer, and he is highly professional. I asked him to sing in the way he felt the most comfortable with. ‘Vanilla Skin Delight’ will blow you away!”