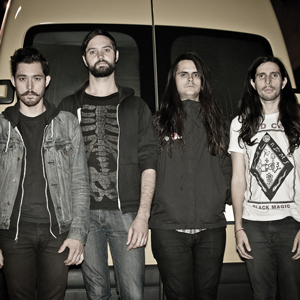 Formed in 2005, Loma Prieta have been a mainstay of the Bay Area hardcore community for more than half a decade. In that time they have released four 12 inch records and two 7 inch records mostly on their own label, Discos Huelga. They have also toured the U.S., Japan, Canada, and Mexico numerous times, all while members play in several other hardcore bands (Punch, Beau Navire, Us Haunted Bodies).

While Loma Prieta’s sound is difficult to describe, it is clear that they come from the rich tradition of creative Bay Area hardcore bands such as Mohinder, Funeral Diner, Bread and Circuits, Yaphet Kotto, and Indian Summer. Eschewing sub-genres in favor of organically writing songs that are personally fulfilling, each Loma Prieta record is substantially different from the last. Nonetheless, Loma Prieta have managed to forge a distinctive form of expression that is entirely their own.

For “I.V.” the band’s Deathwish debut, Loma Prieta once again worked with longtime collaborator Jack Shirley (Atomic Garden Studio). With his guidance Loma Prieta tracked to tape 12 songs intensely emotional songs. Written during a time of great personal suffering and transition for the band “I.V.” is the creative culmination of those collective experiences. From the opening breath of “Fly by Night”, Loma Prieta crash and bang melody and discord together into one beautiful work of art. This grinding theme continues throughout “I.V.” in stunning songs like the aptly named three parter “Trilogy 4, 5, and 6”. Creating a powerful and unpredictable ebb and flow to their emotional outpouring. As the dust settles on the distorted haze in closer “Diamond Tooth”, an artistic coherency and clarity emerges that can only be described as Loma Prieta. A new kind of melancholy chaos that should be familiar, yet challenging, to those who enjoy bands like Love Lost But Not Forgotten, Pg. 99, La Quiete, and the ilk.