We’re really proud to announce the next & FIRST VINYL release ever on INFERNÖ Records and very excited since it is one of the best albums ever released by a french band (which is in our opinion is definitely among the very best bands from France) .. Time has come to reveal the details : LONEWOLF “Army Of The Damned” will be soon available on VINYL format – this will be lilmited to 300 copies worldwide (150 on regular BLACK vinyl, 150 on BLUE vinyl) and comes with inserts with lyrics, pics…
Release date is OCTOBER 2013 but we really encourage you to pre-order your copy as we’re confident this will sell very fast ! LONEWOLF have over the years created a huge die-hard metal fanbase and obviously the pack is waiting for this new item !!!

Fab – the boss of INFERNÖ Records – says : “It has been a long time it was said INFERNÖ Records & LONEWOLF have to join forces and release something together… For some reasons, it was not possible so far…. INFERNÖ Records & LONEWOLF have always been great friends showing mutual respect to the respective jobs both did so far… I am really proud & honored this day has finally come, especially that it will be released on VINYL, something we never did before… A vinyl release was always in mind since the beginning of the label, but the label had first to grow and be “healthy”, before it was possible… and I wanted the first vinyl release to be something SPECIAL… So I think the day has finally come and it is a great feeling !!!

Release date is set for OCTOBER 2013 and you can pre-order your copy from our BIG CARTEL Page (No fake ! We always use BIG CARTEL for pre-orders) by clicking on : www.infernorecords.bigcartel.com

Two songs of the album are available for streaming on Youtube :

For more infos on the band www.lonewolfdivision.com 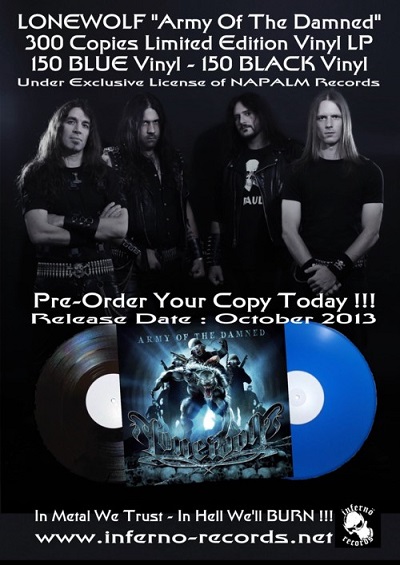 LONEWOLF – Army of the Damned