Relapse Records is proud to announce the signing of Portland, OR riff worshippers LORD DYING.  Formed in 2010, LORD DYING (E. Olson-guitar/vocals, D. Capuano-bass, J. Reid-drums/vocals & C. Evans-guitar) are veterans of the heavy music scene, having played in bands such as Black Elk, Portals, Le Force, and Cremains. The band has so far released a sold out 7” and a sold self-titled tour EP. The song “In a Frightful State of Gnawed Dismemberment” from both releases can be heard via their official bandcamp page HERE.

LORD DYING recorded their forthcoming full-length debut this past September with Sanford Parker (NACHTMYSTIUM, YOB, RWAKE). The album is currently being mixed and mastered and will see its release via Relapse Records this Summer. 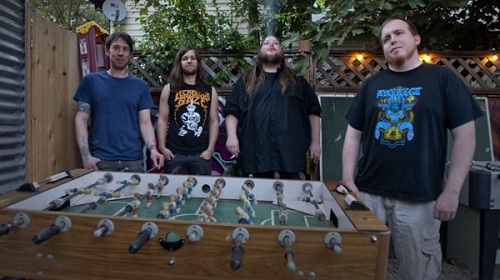 LORD DYING has built up a reputation with their ear-shattering live shows, having recently trekked across the US with label-mates RED FANG and BLACK TUSK in addition to being direct support for BLACK COBRA, WITCH MOUNTAIN and GAZA. Now they will be hitting the road for a string of shows with DOWN and WARBEAST starting on Jan 22 in Seattle, WA.

Additionally, the band commented on signing to Relapse Records:

“We are honored to be a part of the Relapse family. Throughout the years, Relapse has released some of the most intriguing records in the world of extreme music. While it is intimidating to join the ranks of the Relapse roster, we look forward to the future. The gloves are off.”