The four depraved individuals who form the LORD MANTIS cult — bassist/vocalist Charlie Fell, guitarist/vocalist Andrew Markuszewski, drummer Bill Bumgardner and newly inducted guitarist/vocalist Ken Sorceron — have culminated their contempt for humankind and some of the most horrific personal experiences over recent years into an exceptionally malevolent entity on Death Mask. Unleashing something far darker even than their already iniquitous prior LP’s — 2009’s Seventh Rule debut, Spawning The Nephilim, and 2012’s Candlelight-released Pervertor — the visceral punishment one will endure on the seven works of Death Mask is not for the weak. Dredging forth their most disturbing works yet, born forth from some of the darkest recesses of the human psyche, LORD MANTIS recorded the fifty-minute album with Sanford Parker (Twilight, Voivod, Eyehategod, Yob) at Chicago-based Electrical Audio and Soma Studios, who is also responsible for engineering both prior albums. Indian’s guitarist/vocalist Dylan O’Toole also contributed additional vocals on two of the tracks on Death Mask, adding yet another dose of nihilism to the mix. 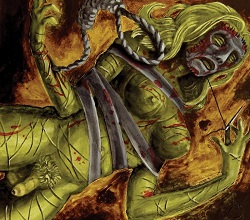 The cover art for Death Mask, from the warped visualization of tattooist/musician Jef Whitehead (Leviathan, Twilight), has been released along with the full track listing and more ahead of its street date of April 29th, 2014.

Following the Springtime release of Death Mask, LORD MANTIS will tour out to the East Coast this Summer, as the henchmen have now been confirmed to raid the third annual New York City-based underground fest, Martyrdoom. Running from June 27th through July 1st at Brooklyn’s Saint Vitus Bar, LORD MANTIS is now locked to perform the final night of brutality alongside Mournful Congregation, Lycus, Vilkacis and Evoken that evening alone. A full tour routing based around the Martyrdoom set will be announced in the coming weeks, amidst additional live events.