All dates have now been confirmed for “Gloom over Europa,” a tour uniting American funeral doom act LOSS with Germany’s WORSHIP for a string of dates across Europe this May. These will be the first LOSS performances ever on European soil, beginning with an appearance at Heavy Days in Doomtown III in Copenhagen, then followed by shows with WORSHIP in Denmark, Germany, Belgium, The Netherlands, France, Italy, Slovenia, Austria, and Poland.

Loss began in Nashville, Tennessee in 2003, issuing their first demo, Life Without Hope… Death Without Reason, in 2004. The following year saw the release of now-rare split EPs with Necros Christos and Worship. After a period of east coast US touring and writing, the band took part in theOf(u)r Burials split with Mournful Congregation, Otesanek, and Orthodox. This led to the band signing with Canada’s Profound Lore Records, for whom they recorded the critically-praised full length Despond in 2011. More US touring followed in 2012 with labelmates Worm Ouroboros, followed by appearances at Maryland Deathfest and the Stella Natura Festival in 2013.

In honor of this tour, Loss and Worship are reissuing their long out-of-print split 7″ on Doomentia Records, the label that is also behind the brand new Loss/Hooded Menace split A View from the Rope, featuring the first new Loss song in three years. Both EPs will be released on this tour, on which material from both splits will be performed live. 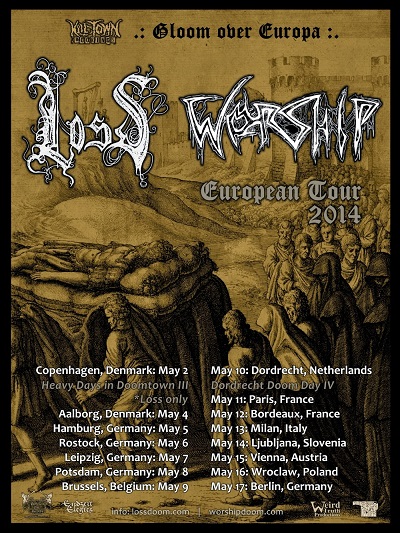