Metal Mind Productions will release, in early June, the first live DVD by the Polish progressive rock band Love De Vice. The DVD entitled “Silesian Night 11.11.11” is planned to be released on June, 4th in Europe and July, 24th in USA (via MVD).

The band was formed by a bunch of friends who had previously played together in several different rock bands. Finally, at the end of 2008, they came together and started to work on their debut album under the moniker Love De Vice. The album entitled “Dreamland” was released in June 2009. The band spent the rest pf the year playing live shows to promote “Dreamland” and rehearsing the material for the second album. They also produced their first video for the song “Foggy Future”, which you can still watch HERE. The debut release was also appreciated outside of Poland. In October 2010, the band performed at the prestigious festival Prog Power Europe in Holland. Also in 2010, the band released the sophomore album entitled “Numaterial”.

And today they are back with their first DVD release, which features their outstanding performance at the Silesian Theatre in Katowice on November, 11th 2011. 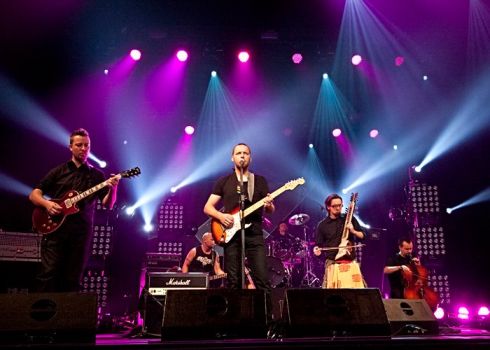 For the band, it wasn’t just an ordinary gig, it was also a chance to present the renewed “spirit and body” of Love De Vice. On that cold and dark November evening, the band performed in a new, improved line-up – with the new keyboardist, Jack Melnicki (LSD Project, ex-Riverside), whose rich and spacious arrangements ideally tuned into the style of the band. Except for a few well-known tracks taken from their two albums, they mainly presented brand new material. Six out of nine compositions recorded on that night are planned to be included on their new, as yet untitled studio album. These include such compositions as the Floyd-ish “Another Day”, the delicate “Frosty Morning”, reminiscent of King Crimson’s debut, and the oriental “Winter of Soul”, performed with hard rock spirit, as well as the monumental “Say No”. Besides the new original compositions, the tracklist also includes a cover of Deep Purple’s “When a Blind Man Cries”, played in a completely different arrangement, and the band’s best-known pieces, such as “With You Now” and “Letter in A Minor”. On that night, Love De Vice was accompanied by such guests as the National Philharmonic musician Mateusz Szmyt on cello and Tomasz “Ragaboy” Osiecki on dilruba (which is a variation of the Hindu sitar played with a bow), which spiced the arrangements with an even more oriental atmosphere.
The “Silesian Night 11.11.11” DVD will also include additional materials, such as interviews with the band members, photo gallery, band’s history and the video clip “Foggy Future”.

You can see the selection of photos taken on that night in THIS location.