Luca Turilli’s RHAPSODY are proud to announce the special guests of the European leg of their ASCENDING TO INFINITY CINEMATIC WORLD TOUR 2012: FREEDOM CALL and ORDEN OGAN from Germany and VEXILLUM from Italy.

“We worked with the tour agency ROCK THE NATION to offer to the people a great package with 4 amazing bands. Now here it is”, says the new singer ALESSANDRO CONTI. And adds: “On top RHAPSODY are ready to offer a unique show of around 2 hours based on new songs, old songs from the first albums rarely or never played until now, a few exclusive surprises from the solo albums of LUCA TURILLI, video projection and much more. Looking forward to meeting each one of you in November and December all around Europe. See you soon!”

At the moment 23 tour dates have been already confirmed. More European dates will be announced soon.

Be part of the cinematic live event of the year and get your ticket now at: http://www.ltrhapsody.com 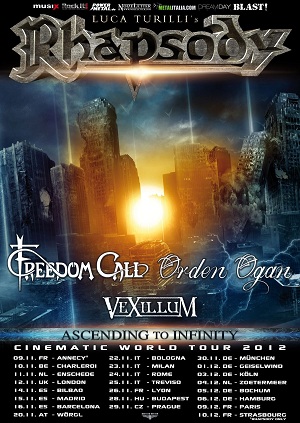