Night Sacrifice (Demo MMXII) from Chilean traditional heavy metallers LUCIFER’S HAMMER is available now digitally on Shadow Kingdom Records. A cassette tape version is tentatively set for a mid-February release; the exact date will be announced soon.  Shadow Kingdom Records’ Tim McGrogan had this to say about the release:

“Shadow Kingdom Records is proud to introduce from the land of Chile, Lucifer’s Hammer! This is very reminiscent of rare ’80s US metal gems like SALEM’S WYCH, GRIFFIN, HEATHEN’S RAGE, DAMIEN THORNE, etc. Also more-well known acts like IRON MAIDEN, ’80s JUDAS PRIEST play a huge role in the development of their sound. They’re one of those rare new bands that could actually fool people into thinking they’re an obscure Heavy Metal act from the ’80s that fell beneath the cracks. Luckily for all of us, they’re a brand new band just starting out and they have a lot of good songs in them. ‘Night Sacrifice (Demo MMXIII)’ is the very first of many releases to come. Check out this amazing band!”

Preview and purchase Night Sacrifice (Demo MMXII) at the link below: shadowkingdomrecords.bandcamp.com/album/night-sacrifice-demo-mmxiii 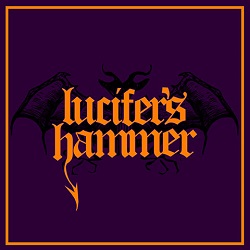 LUCIFER’S HAMMER – Victory Is Mine EP