Dark Descent Records has recently inked (in blood) a deal with London blackened death metal band Lvcifyre for the release of their as-of-yet-untitled sophomore full-length, which is due out in early 2013. The band commented:

“We are proud to announce the addition of Lvcifyre to the Dark Descent Records roster. The label will be responsible for releasing Lvcifyre’s second full-length opus and follow-up to the seminal debut The Calling Depths.

Over the past three years, Dark Descent has built up a notorious reputation of delivering the highest-calibre works of Death Metal Darkness from the underground and proudly propagating the Fallen Light. Thus, it is the perfect lurking place for Lvcifyre. With the new album, Lvcifyre will unleash the most wrathful and apocalyptic sonic plague heard by Man; manifesting the hidden forces beyond the threshold to awaken the Darkness lurking deep inside you! HDHM!”

Live footage of Lvcifyre performing the song “The Faceless One” has been posted at this location. 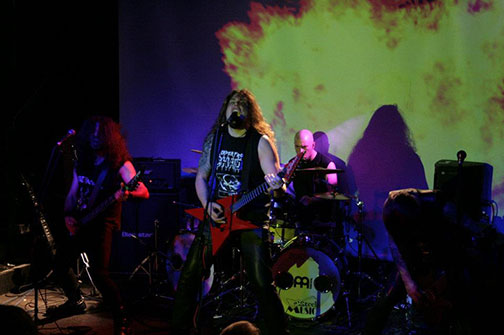