Long Island-based heavy metal powerhouse MAELSTROM has issued an update regarding the enormous reception received by the Halloween 2012 digital reissue of their critically-acclaimed  EP, It Was Predestined. Widely-praised by critics across the globe in 2009, when the EP was originally self-released, and again last year when Itchy Metal Entertainment (IME) offered the release to metal fans worldwide, It Was Predestined exploded onto the CMJ Loud Rock charts this month. MAELSTROM vocalist Gary Vosganian had this to say about the accomplishment.

“It is with great pride that I can say – MaelstroM has hit the US radio charts with our EP It Was Predestined – debuting at #20 on the Nationwide CMJ Loud Rock charts and as the 4th most added album in the country. Thank you to all that have helped and have been fans since the start and congrats to my partner in this effort the true guitar virtuoso Mr. Joey Lodes. Our label partners Itchy Metal Entertainment our PR group ClawHammer PR and of course our radio promoter Munsey Ricci and Skateboard Marketing Ltd. without whom this would have never happened, and of course all the fantastic Djs that are supporting us with their spins – it is sincerely appreciated. There is much work to be done as guitar tracking for the balance of the album has begun this week. But I will take a little time to really absorb the news about CMJ and celebrate this victory! Thanks again to all the fans who have stuck by MaelstroM your unwavering support has been amazing. Keep it Heavy!”

As Vosganian stated, the band is currently at work on new material for the follow-up to It Was Predestined. Details on the next release will be announced as they come. Stay tuned!

It Was Predestined is available at www.itchymetal.com. Famed music journalist Martin Popoff called the release “A symphony of progressiveness the likes of which has pretty much never been articulated, invented, or heard, before now,” and world renowned publications such as Terrorizer, Metal Hammer and MetalSucks.net all sang MAELSTROM‘s praises upon the EP’s release.

For more on MAELSTROM, visit www.facebook.com/metalmaelstrom. 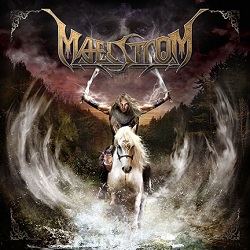 Hot News: Maelstrom’s – It Was Predestined Out Now on Itchy Metal Entertainment

Hot News: Critically Acclaimed Maelstrom EP It Was Predestined to be Released on Itchy Metal Entertainment