After more than six years of waiting, MAJESTY will release the comeback studio album „Thunder Rider“. The album will be released just in time before the GERMAN METAL ATTACK tour on January 4th In Germany, Austria and Switzerland and then on January 25th in the rest of Europe.

The band signed a long-term record deal with NOISEART RECORDS and „Thunder Rider“ will be the first MAJESTY release on the ambitious Austrian label.

Vocalist Tarek “MS” Maghary to this:
“We are already excited about the dedication, the enthusiasm and the professionalism of NOISEART. Those guys are true metalheads like ourselves who fight with full force for Heavy Metal. It´s the beginning of a new era for MAJESTY and “Thunder Rider” is a mighty kick in the ass for everybody who had doubts about MAJESTY and our will for victory. We are back – stronger than ever and with NOISEART we have a mighty partner on our side!”

NOISEART Records also already issued a first statement.
“We are proud to welcome the band MAJESTY in our Roster! We were tracking the activities of the band for years and are looking forward to successfully work together with MAJESTY in the future!” 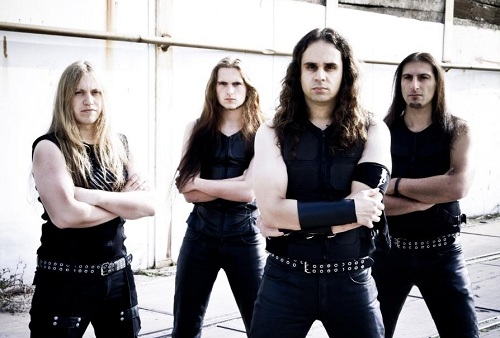 “Thunder Rider” will be available in various editions. In addition to the regular CD there will be a special edition which, besides one more song, includes a DVD featuring amongst other things the documentary “Metal Union” on which many bands and journalist try to unveil the secret of metal.
The song “Metal Union” which ends the album “Thunder Rider” is the musical conversion of that theme. Along with Tarek, Sven D´Anna (WIZARD), Hannes Braun ( KISSIN´ DYNAMITE ), Mat Sinner (PRIMAL FEAR / SINNER), Patrick Fuchs (ROSS THE BOSS BAND), Andreas Babushkin (PARAGON) and Marta Gabriel (CRYSTAL VIPER) sing on that song.

Furthermore various vinyl editions will be available. But they will be strictly limited so everyone who is interested in a unique collector´s item should be very fast.

Further information regarding album tracklist, cover etc. will be announced next week!