MAJESTY is proud to present you the video clip of the title track of their forthcoming album „Thunder Rider“. The video was produced by famous German film-maker Dirk Behlau who visualized the power of the band in a perfect way.

After a nearly unbearable latency for the fans the band will finally release the highly anticipated new studio album “Thunder Rider” on January 4 (G/A/S) and January 25 (Europe), 2013. Every single track on the album is a heavy metal hymn par excellence and designed to go down in metal history. The production of the album is mighty and powerful like an army on the way to the battle, quaking the earth. Commented MAJESTY singer Tarek „MS“ Maghary: “We had the whole production in our own hands and I have to say, the result is more than magnificent. Everyone who´s asking, how the perfect metal album should sound like, ought to listen to “Thunder Rider” because this album is the answer!” 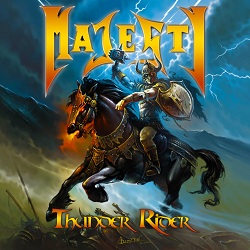 Everybody who have seen the band already live knows that heavy metal is more than just music for MAJESTY. For the band it`s a way of life and religion all in one. By the end of 2012 the band signed a worldwide record deal with NoiseArt Records and is sure to have finally found the right partner which has the same attitude.

“Thunder Rider” will be available in several editions. Besides the normal CD there will be a special edition available including a bonus track and a DVD. The DVD will feature a documentary called “Metal Union” containing interviews with a lot of bands and journalists who´re trying to unveil the secret of heavy metal music. The song “Metal Union” which concludes the album “Thunder Rider” is a musical conversion of this topic. Besides Tarek you´ll hear Sven D´Anna (WIZARD), Hannes Braun (KISSIN´ DYNAMITE), Mat Sinner (PRIMAL FEAR / SINNER), Patrick Fuchs (ROSS THE BOSS), Andreas Babushkin (PARAGON) and Marta Gabriel (CRYSTAL VIPER) singing on this song. Furthermore the album will be released as a strictly limited vinyl edition!

Here you can pre-order the album: http://shop.noiseart.cc/c13-58/MAJESTY 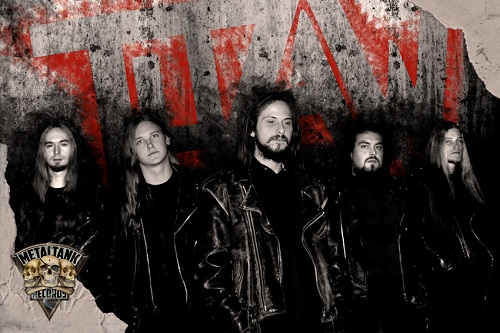 To celebrate the album release MAJESTY will be touring extensively. From January 11th on the band will be on the so-called German Metal Attack tour with GUN BARELL, WIZARD and GRAVE DIGGER. Everyone having at least a drip of metal in their blood should doubtlessly be there!