Independent filmmaker Will Wulff and metal veteran/journalist Jeff Tandy have launched a crowd-sourcing campaign through IndieGoGo.com to help fund the making and production of “Lone Survivor – Paul Speckmann and the Story of Master,” a documentary film about one of death metal’s earliest and most influential pioneers.

Perks for contributors include DVD copies of the completed film, inclusion and thanks in the film’s credits and an assortment of Master and Death Strike merchandise. To see a video message from Paul Speckmann and to contribute, visit this location. 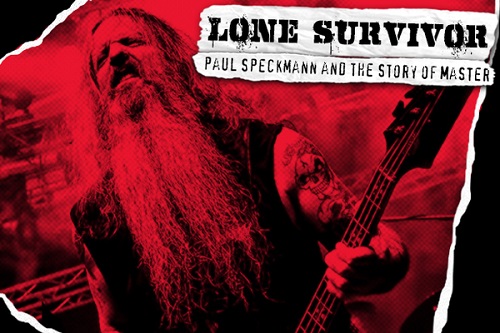 Before there was death metal, there was Paul Speckmann. Armed only with the anger of youth and a desire to set underground ablaze, Speckmann helped create the template for an entire genre with his band Death Strike and soon after with a revised version known throughout the world as Master.

Timing is everything in the music business, and Master became defined by its near-misses, along with a relentless drive to perform, create, and persevere in the face of daunting odds and difficult sacrifices. Over the last 30 years, their music has influenced anyone and everyone who made a name for themselves in extreme metal, but like many pioneers, those who came after have claimed much of their rightful glory.

Lone Survivor is not just the story of Paul Speckmann, but the story of anyone who has chased a dream and endured the victories and defeats that come with the journey. It is a warrior’s tale as old as time itself, seen through the eyes of one of death metal’s most enduring figures. Join us. Help us tell the story the way it was meant to be told. This one is for the underground and everyone who fights in those trenches with a fearless smile and guitar in hand. It is our story – the story of metal, the story of the survivors.

Master is currently out on the North American Witchhunt Tour in support of their latest album, The Witchhunt. Remaining dates are as follows:

The Witchhunt features 11 brand new tracks of classic and catchy death metal played with the intensity and attitude that MASTER fans have come to rely upon over the years. The album’s thick, massive production demonstrates the band’s superb musicianship and songwriting skills. This is an album that sees MASTER at the top of their 20+ year career. The Witchhunt is out now on FDA Rekotz.