Portuguese extreme progressive metallers MALEVOLENCE have set ANTITHETICAL as the title of their forthcoming third album.

The main theme of the album illustrates a razor-sharp concept inspired from Ancient Greek Etymology (1580s, from Gk. ANTITHETIKOS) that reflects the diametrical opposition to a number of propositions consisting in the revelation of a divergent thought. Pertaining to ANTITHETICAL, the Anti (against) + Thesis (position), as a figure of speech (mainly used by the authors of the Baroque period; style of the epoch known as the art of conflict) acknowledge opposition towards the relative thesis expressed. 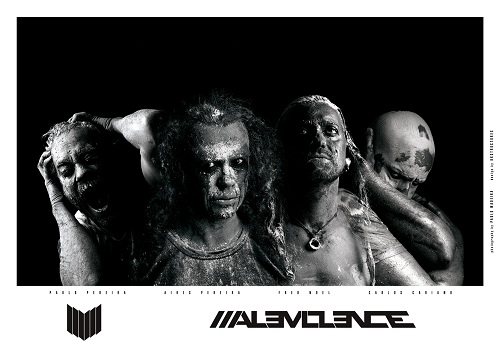 MALEVOLENCE singer/guitarist/songwriter Carlos Cariano detaching a slight sparkle on the title and its significance, said:

“ANTITHETICAL is loaded with intoxicatingly corrosive contrasts whilst the album represents pure rebellion, a pure nonconformist extension towards the current situation of the globe, an upheaval towards the current language  that has no force of expression and no meaning, due to the predictability of words and counterfeit actions that have become commonplace worldwide.

Inner strength and living values nowadays are negatively base underneath relative truths and we are expressing ourselves precisely antithetically whilst insisting on critical thinking”.

Music and lyrics are far beyond the average practice and ANTITHETICAL is a very unnatural progressive slab of extreme sonic amalgamation creating parallelisms to simplify extremes whilst apprehending both the positive and the negative perspectives of existence, in order to erect with the synthesis that transcends both.

As Hope is ANTITHETICAL to Despair, the contrasts established within the album serve in effect to give tension to the broad-spectrum body of work consisting of 7 songs.

ANTITHETICAL includes the most epic material (longest song clocking at 9:27m), plus the heaviest proportional songwriting ever accomplished on the eighteenth year of existence of the collective.

The final track listing and further details shall be revealed soon.