Yonkers, New York-based technical death/grind legends Malignancy are pleased to unleash their latest slab of sonic bestiality in the form of Eugenics. Set to be unearthed in Europe on October 8th, 2012 through Willowtip Records/Hammerheart Records, Eugenics was recorded throughout 2010 – 2011 by Eliot Gellar at the Gellar Cellar Studio in Mahopac, New York, mixed and mastered by Luca Minieri at Dissonant Studio in Aosta, Italy and features the cover art of Justin Osbourn of Slasher Designs. Loosely based around the concept of eugenics — defined as “the study of or belief in the possibility of improving the qualities of the human species or a human population, especially by such means as discouraging reproduction by persons having genetic defects or presumed to have inheritable undesirable traits (negative eugenics) or encouraging reproduction by persons presumed to have inheritable desirable traits (positive eugenics)” – the band’s third full-length hurls forth 10 mercilessly brutal hymns of technically proficient audio carnage. 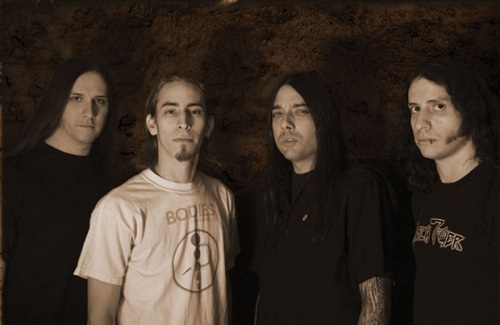 Elaborates the band in a collective statement: “Eugenics is a culmination of Malignancy past and present with a hint of what’s to come in the future. Recording the new tunes with a click track was a totally new experience.”

Check out the cover art as well as first track, “Type Zero Civilization,” at this location.

In the near future humans will face the very real threat of extinction. Either natural or man-made, it will come to pass. Eugenics is an account of what may happen.

Forced to dwell hundreds of miles underground, in an abandoned U.S. archive, they fight to live. This installation still contains all the necessary previsions needed for survival. A self sufficient complex, far removed from the vigor of life topside. It is equipped with generators, a constant replenishing air supply, even waste management. A perfect habitat for the evolution of the last species on Earth, Man. 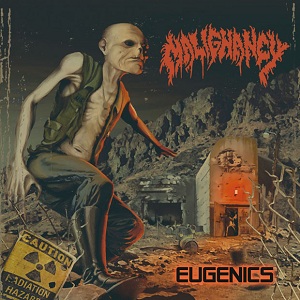