MANOWAR’s new studio album, The Lord Of Steel, will first be released worldwide on June 16, 2012 exclusively on iTunes and on the band’s own online store, The Kingdom Of Steel (www.thekingdomofsteel.com).

On the same date, Metal Hammer UK will release a special ‘Steel Edition’ of Metal Hammer #233, including the CD and a digital copy of the album.

The Lord Of Steel is blazing with pure power, untamed energy, and a sound as raw and wild as a force of nature. Track titles like Annihilation andHail, Kill And Die! set the tone for a record that is packed with surprises.

In contrast to the 2007 release Gods Of War, this new album is not a concept album, yet each song tells a different story, retaining the MANOWAR vision of righteousness, honor and everything MANOWAR fans have come to know and love.

MANOWAR fans should expect to have “their heads completely blown off” said MANOWAR bassist Joey DeMaio in a recent interview, and explained that “…this album is all about brutality and raw power!”

Known for their adventurous spirit and for never releasing the same style of album twice in a row, MANOWAR have this time tapped into the world of action heroes and their stories, writing their first song specifically for a Hollywood movie, EL GRINGO and another one, Expendable, inspired by Sylvester Stallone’s action movie franchise ‘The Expendables’. 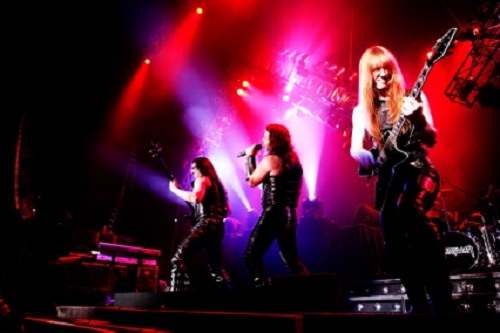 The trailer for the film ‘El Gringo’ featuring a short sample of the theme song can be seen here: http://youtu.be/cfaOoABkQW4

A sneak preview into the song ‘El Gringo’ can be viewed here: http://youtu.be/2JOqDxJ5trY

A sneak preview into the song ‘Expendable’ can be viewed here: http://youtu.be/koNYpiwHjHY

“We were talking about a concept album but then got inspired to go in a different direction. This is where we are right now,” explained Joey DeMaio.“I’ve been doing research on getting the best microphones and pre-amps for the guitars. The bass sound is death defying. We’ve done a lot of work on drums too, giving Donnie room to stretch out. And Eric will simply sound bigger than life as always.”

MANOWAR are ready to celebrate their new album in a manner worthy of The Kings Of Metal with headlining performances at open-air summer festivals across Europe.
Upcoming MANOWAR headlining tour dates:

About MANOWAR:
MANOWAR´s influence in the Rock Music industry is undeniable. During their impressive career they have left their mark in the Heavy Metal genre, thanks to a combination of unique craftsmanship and characteristic songwriting. With unrivaled conviction, persistence and the courage to unflinchingly pursue their own way, the band has weathered even the most unconquerable challenges. In an age of casting show “talents” and flimsy one-hit-wonders, this band gives their fans what they love them for: the massive, powerful soundtrack of their lives, songs that celebrate the audacity of the individual, and the spirit of the community. The band has earned numerous gold and platinum awards and completed more than 35 tours headlining venues that averaged between 10,000 and 50,000 sold-out seats. MANOWAR’s unparalleled loyal following all over the world is reflected in their live events: fans from more than 40 nations traveled to celebrate the Magic Circle Festival in Germany for example. As a tribute to their devoted international following, MANOWAR’s 2009 release Thunder In The Sky achieved another first in Heavy Metal history by recording the power ballad, “Father,“ in 18 different languages.