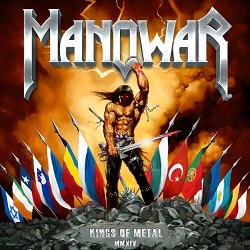 MANOWAR have revealed the front cover of their upcoming double album ‘Kings Of Metal MMXIV’, an evolution of the original 1988 cover by Ken Kelly.

A new painting by Ken Kelly, featured on the back of the CD, will be revealed soon.

“Ken has always been able to perfectly capture the essence of MANOWAR in his art. These covers, the two new ones and the one he created in 1988, visualize what MANOWAR, our music and our fans stand for! Just look at these paintings and the story they tell: People have tried to keep this warrior down, attacked him and attempted to destroy him. But he stood tall, no matter what! He fought for true metal in country after country. And he will continue the march and fight for his brothers and sisters all over the world, until all enemies of true metal have been crushed!” explained Joey DeMaio.

“This collaboration has been an incredible experience once again”, said Ken Kelly. “We didn’t know where the journey would lead us. The art literally takes over and the music and the lyrics guide us. I truly believe the MANOWAR fans are going to love this series.”

‘Kings of Metal MMXIV’ is a completely new recording, celebrating the 25th anniversary of the release of ‘Kings Of Metal’.

The ‘Kings of Metal’ release in 1988 and the following world tour in 1989 catapulted MANOWAR into a new sphere. Songs like “Heart of Steel”, “Kings of Metal”, “Hail and Kill”, and “Blood of the Kings” became instant classics, celebrated since by metal fans all over the world.

For ‘Kings Of Metal MMXIV’, MANOWAR have recorded these timeless metal anthems with new arrangements and their signature “larger than life” sound that sealed their place in heavy metal history.

‘Kings Of Metal MMXIV’ will feature 9 main tracks packed with face-melting metal, plus 10 bonus tracks with over 45 minutes of additional music.

The spoken word track “The Warrior’s Prayer MMXIV” features celebrated British actor Brian Blessed, a renowned Shakespeare and character actor who has starred, among others, in Kenneth Brannagh’s “Henry V”, in “King Lear”, and as Prince Vultan in the cult movie “Flash Gordon”.

Special effects of the highest level were provided by award winning sound designer Hamilton Sterling, known for “Batman – The Dark Knight”, “Men In Black 3”, “War of the Worlds”, and “Master and Commander: The Far Side of the World”, two of which won Oscars® for Best Sound Editing.

‘Kings Of Metal MMXIV’ will be released in retail on February 28, 2014 as a 2 Disc CD with two 24-page booklets and new cover art by legendary fantasy artist and longtime collaborator Ken Kelly, and will also be available as a digital double album.

The ‘Kings Of Metal MMXIV’ world tour, featuring the complete new album and many other classics in a completely new stage production starts on February 7, 2014 with a long-anticipated U.S. tour and will then resume on March 18 in Europe.
All tour dates can be found on http://www.manowar.com/tour