The new edition takes MANOWAR’s multi-award winning, best-selling album to the next level. Fully remastered and with a different bonus track, this brand new edition provides even higher sonic quality than ever before.

“It was an amazing experience, re-visiting this production. There are so many great memories associated with this album, from the recording to the post-production to the many unique live performances. All these experiences go into your work, when you sit in the studio and create a new experience for your fans” said DeMaio.

Warriors Of The World 10th Anniversary Remastered Edition contains all 11 tracks from the original release, entirely remastered, plus a live recording of ‘House Of Death’, recorded during the Battle Hymns MMXI Tour at O2 Academy in Birmingham, England; MANOWAR’s triumphant return to England after 16 years.

The album features, among others, the iconic title track ‘Warriors Of The World United’, the battle cry ‘Call To Arms’, and a series of further favorite hymns, including ‘Hand Of Doom’ and the live favorite ‘House Of Death’. 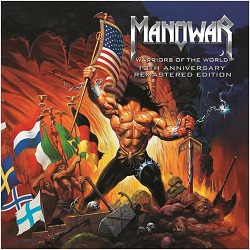