“BEAUTY IN THE SUFFERING is an evolving concept I came up with years ago that best described a sense of optimism during some bright spots of an otherwise massive struggle against overwhelming odds.

Music I have been writing and expressing over the last several years has been uniquely intimate in reflecting those struggles and I am very excited about putting out some fresh ideas that represent the here and now. 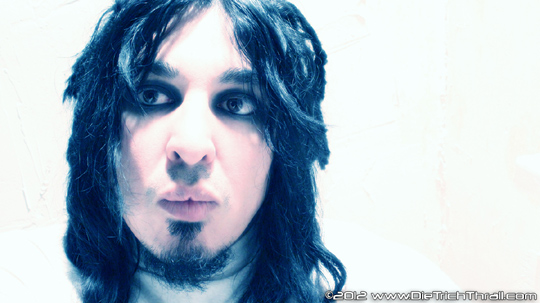 BEAUTY IN THE SUFFERING deals with universal themes of love and loss, defeat and resolve, and struggle and triumph.

Everybody has moments where the road looks impossible to pass. But somehow, little by little we manage through our own inner strength and the purposeful placement of fate, chance, and karma. We emerge wiser and with a deeper understanding of ourselves and of our place in the world and the beauty we glean from the suffering we have endured can never be denied.

This is a journey I accepted long ago. I wear the scars of my personal triumph over my struggles with pride and I stand ready to face new challenges.

And, like the Phoenix rising from the ashes, this is a new beginning. I thank you all for standing by my side during some very difficult years of active-inactivity. The future is wide open and full of nothing but payoff.”

From managing the band during its most active and successful National touring years (2006-2008) with acts such as MUSHROOMHEAD, WEDNESDAY 13, DEADSTAR ASSEMBLY and PSYCLON NINE, to co-producing the bands critically hailed cover of MOTLEY CRUE’s “LIVE WIRE” in 2011 as well as the bands lone official full length album (MachiNation, 2006), to writing fan favorite tracks such as “GIVE” (SkumF***erz), to guiding the bands philisophical and edgy lyrical approach (AnTiThesis, Infidel Society), to producing multiple videos for the band, DieTrich’s contributions and influence are heavily noted.