“Stand In Line,” a brand new song from Gothenburg, Sweden based metal-sextet MARIONETTE can be streamed exclusively at this link: http://www.metalhammer.co.uk/news/exclusive-marionette-release-new-track/

“’Stand In Line’ is one of the faster songs on Nerve.  It is aggressive lyrically, in your face, and very keyboard driven.  It also contains one of the few guitar solos on the album. It shows another dimension to Nerve and MARIONETTE for those familiar with another new song we recently posted titled ‘Remember Your Name.’  Those of you who see us on ‘The SlaughTour 2011’ next month will get to hear this song live and in its rawest form.”

MARIONETTE will release its third album, Nerve, worldwide on December 5th, 2011.  The album will be released digitally via Pivotal Rockordings in all major web-retail outlets and streaming services while the physical album will be self-released by MARIONETTE in individually numbered high-quality digipaks featuring two exclusive bonus tracks.  Artwork for the release was handled by Gustavo Sazes of Abstrata Design (ARCH ENEMY, FIREWIND).

Video footage featuring the studio version of the track “Remember Your Name” in its entirety can be viewed at the link below.

Nerve, the follow up to MARIONETTE’s 2009 release Enemies, was recorded at Studio Fredman with producer Fredrik Nordström (IN FLAMES, DIMMU BORGIR, AT THE GATES), was mixed by DEAD BY APRIL songwriter Pontus Hjelm at Studio PH in Gothenburg and was mastered by Erik Broheden (RAMMSTEIN, TURBONEGRO, WITHIN TEMPTATION) at Masters of Audio Studio in Stockholm, Sweden. 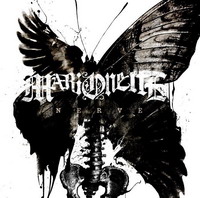 *Only available on physical album version.

MARIONETTE will take part in “The SlaughTour 2011” alongside fellow Swedes DEAD BY APRIL and ONE WITHOUT.  Dates, which have been rescheduled are as follows, tickets previously purchased are still valid:

Tickets can be purchased at: 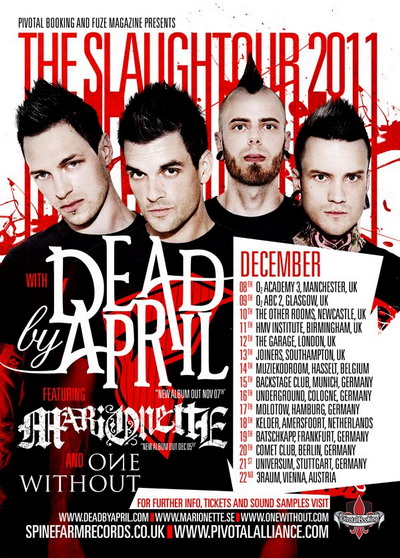 Hot News: Marionette – To Headline Slay The UK Tour in May, Music Video In The Works

Hot News – Marionette To Tour Europe With Deathstars In March

Hot News – Marionette: Unveil Artwork For And Pre-Order Info For “Nerve” And More Tour Dates On “The SlaughTour 2011”