Andreas Marschall is mainly known as an illustrator, who created cover artworks for bands such as Blind Guardian, Kreator, King Diamond, Obituary, Sodom or Running Wild. Now he presents his new, second horror thriller movie titled “Masks“. It’s his second movie after the award winning “Tears Of Kali” from 2004, and a tribute to Giallo genre: Italian thrillers from the ’70s.

“Masks” is a dark and violent tale about Stella, young wannabe actress, who joins a private acting school in Berlin, where an extreme acting technique has been developed, so called “The Gdula Method”, which is a dangerous way of getting most genuine and extreme emotions out of the actor. After causing death of several students in the ’70s, the method is currently forbidden. Officially.

Hypnotic score for the movie has been composed by Orden Ogan’s Sebastian Levermann, while Nils Weise adds fascinating layers of retro sounds on hammond organs. “Masks” touching theme song has been performed by Marta Gabriel of Crystal Viper.

“Masks” is currently being shown on various film festivals, and already won awards in Paris, Vienna, Ravenna and Leeds. Movie will be available on DVD format in October 2012. 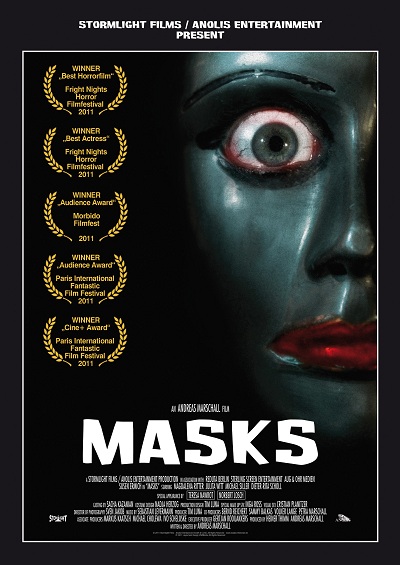