“No rest for the wicked” they say, and how right they are! There’s no better example for this than Martyr Lucifer.
Still the dye of his freshly released solo album “Farewell to Graveland” and of the explosive Hortus Animae reissue album “Funeral Nation MMXII” hasn’t dried and he already has… Three?! Three burning news at once!

The first one is relieving and cathartic. Martyr Lucifer just released online his first videoclip, directed by Matteo Ermeti and produced by BlackHeavens Entertainments, for a radio version of the song “The Horseride”, which you can see here: http://www.youtube.com/watch?v=4LgmqBk5WyA. 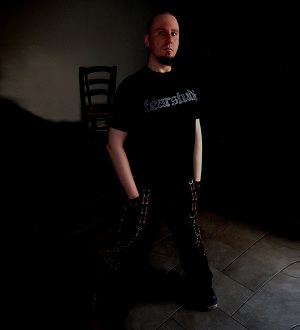 The second is mysterious and horrific, the release of Space Mirrors’ new album “In Darkness They Whisper” where Martyr Lucifer takes the role of lead vocalist. The album has been released by Transubstans Records on August the 1st. From this new album has been unleashed a second videoclip, for the song “Silver Key”, which you can see here: http://www.youtube.com/watch?gl=IT&v=zNY2p5S856c.

And the third remains covered in fog even if revealed! Mr. Lucifer entered Domination Studio again to record two new tracks destined to “Shard One”, the first in a trilogy of EP’s. All the details of this new release are still to be determined.

For more news and updates please visit http://martyrlucifer.net/ and http://www.facebook.com/MartyrLucifer and check out Martyr Lucifer’s official store (http://martyrlucifer.bigcartel.com/) for the three albums in an extraordinary bundle and other devilish temptations so damn hard to resist!