Greek death dealers MASS INFECTION prepares to dominate the death metal scene in 2014 with their new, highly-anticipated full-length album, For I Am Genocide. This is the follow up to their 2009 release The Age of Recreation.

MASS INFECTION has crushed skulls with their precision brutality since 2003. They have certainly proven to be a supreme force with their skillful and technical style of catchy death metal. Mass Infection is strongly influenced by bands like Deeds of Flesh, Hate Eternal and Severe Torture… so you can expect a blistering assault of barbaric insanity!

Album track “Praised by all the Entities” is now streaming at www.comatosemusic.com.
(Alternate YouTube link – http://www.youtube.com/watch?v=33OScqE0X-w). 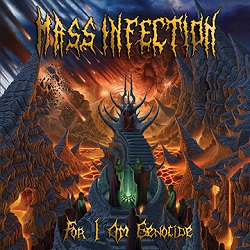 1. Praised By All the Entities
2. The Scourge of Living Forms
3. Hierarchy of the Highest Abomination
4. Beholding the Throne
5. Unearthly Legion
6. Maelstrom of Endless Suffering
7. Beyond Perpetuation
8. Nihilism Reigns
9. The Genocide Revealed

Mass Infection – “To the Lords of Revulsion” dalpremier