We’re happy to announce the signing of TUXEDO!

The Austrian sextet was formed as an alternative/crossover trio back in 2005.

They released their EP “Schizophrenia” in 2009. Soon after and with the addition of a new drummer, they played more metal oriented music.

Their second EP “Fight” was released in 2010 and received good reviews. A second guitarist joined the band and they continued to develop their own musical style. Soon after, Austrian Alpencore was born!

Since their formation in 2005, the band has played more than a hundred gigs in Austria, Germany, Croatia and Slovakia and supported bands like Unearth, Sepultura, Debauchery, Ektomorf and others! They also played at several festivals, such as the Metalfest Open Air Austria, Metal Invasion or Novarock.

You won’t forget a gig of TUXEDO!

Their percussion-driven metalcore with thrash elements is combined with their unique “Alpencore show”, which includes the guys wearing traditional Austrian costumes. Yes, they also wear Lederhosen!

Watch out for news regarding TUXEDO‘s debut album soon to be released via Massacre Records! 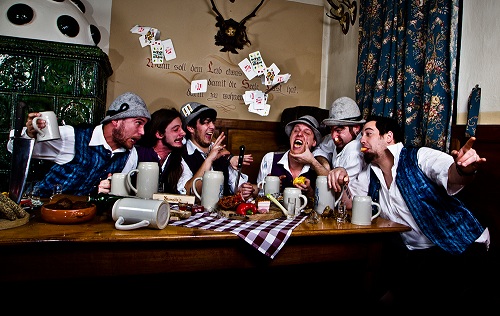