MATT SKIBA AND THE SEKRETS has teamed up with AOL Spinner to premiere the music video for “Voices.” Directed by ZFCL (who also directed “Sextape” by the Deftones), this intriguing, eerie video is for the lead track from Babylon.   Released on May 8th, Babylon is the debut from MATT SKIBA AND THE SEKRETS and charted #1 on the Billboard’s “Heatseekers” Chart in the US. The band will also be headlining their first-ever tour in the US this June. Stay tuned for European tour dates!

Released through Superball Music, this will be the album debut from ALKALINE TRIO founding member Matt Skiba’s solo venture.  With a large variety of musical influences contributing to the impeccable album, similarities to Alkaline Trio’s trademark sound are highlighted and combined with 80s post punk elements.  Babylon was produced by Cameron Webb [30 Seconds To Mars, Social Distortion, Pennywise] and offers ten tracks of addictively dancy rock and sing along melodies. 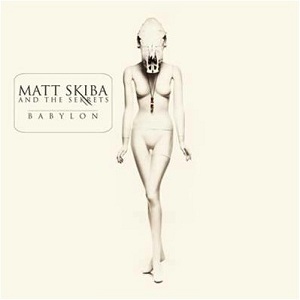 Hot News: Matt Skiba And The Sekrets to Release Debut Album “Babylon” in May Reveals Cover Art and Track Listing