Earlier last month, SCYTHIA released their new music video for “Bear Claw Tavern” via Guitar World. The video has gone viral with over 50,000 views in less than a week’s time. If that isn’t impressive enough, io9 called it “20 Times Better Than ‘The Hobbit’”. Watch the video now, viewable via the band’s official YouTube page: http://youtu.be/pHytTKn9w70. 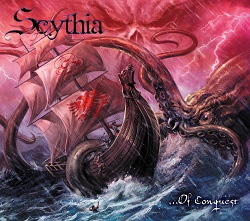 Formed in 2008, SCYTHIA’s music is recognized throughout their home country for its rich, poetic storytelling and epic melodies. Because of this, and touring like a cavalry of nomads, they have taken the independent scene by storm as they gather more and more fans both domestically and internationally. They were nominated for the Best Metal Group/Duo for Canada’s Sirius XM Indies – Independent Music Awards, amongst other reputable Canadian metal bands. Other nominees included Bison B.C, Derelict, Devin Townsend Project and Mares Of Thrace. SCYTHIA delivered their first album “Of War” in 2010 where the band’s distinctive sound was forged, which carried on to their next release “Of Exile”. While recording their third release, “For The Bear”, their sole purpose was to bring great melodic metal to the table, which in response has received nothing but a sensational response in the media and radio. Most of all they did not forget their fans, new and remnant from their earlier years.

Tour dates are currently being booked and a full tour announcement will be coming in early 2014.

Learn more about SCYTHIA at: