Metal Blade is happy to announce the release of the long-anticipated new MARTYR album ‘Circle Of 8’!

MARTYR is a pure Heavy Metal force from the Netherlands. During the five years that MARTYR was alive and kicking (1982-1987), the band released two albums that are considered cult in the Metal scene of today! ‘For The Universe’ (1985) and ‘Darkness At Time’s Edge’ (1986) are classic Metal, a delight for those who love strong melodies, speedy riffs and a high level of technicality.

In those years, MARTYR appeared on compilation albums from Roadrunner and Metal Blade, was voted Holland’s best new Metal band in Aardschok magazine, has toured with several international acts and appeared on Sky Channel’s Monsters Of Rock.

MARTYR disbanded in 1987, but reunited in 2001 to play the Heavy Metal Maniacs festival. Four years later, the band revived almost the complete 1982 line up to play the Headbangers Open Air and Keep It True festival. The flame has been burning again and the band continued to play live ever since. December 2008 MARTYR supported US Shock Rockers Lizzy Borden on their European tour. But also in 2009 and 2010 MARTYR hit the European stages supporting great acts like Flotsam & Jetsam, Vicious Rumors, Jaguar, Evergrey, etc. 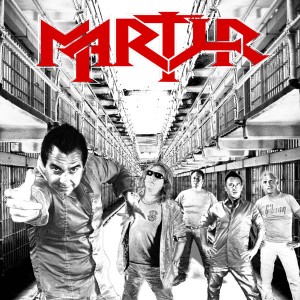 In 2009 the first new MARTYR record in almost 25 years has been released. That’s when the new EP‘Fear’ was coupled with a re-release of the classic ‘For The Universe’ album as a double digipack entitled ‘Fear The Universe’ on Rusty Cage Records (RCR0017).

Comments the band: “MARTYR is really pleased to have the new album “Circle Of 8” released by Metal Blade Records. It feels like a reunion with metal friends for us after the “Metal Massacre VI” release in 1986!”

‘Circle Of 8’ contains 11 new tracks and one oldie & fans favourite, ‘Speed Of Samurai’, which has been re recorded.

‘Circle Of 8’ will be released November 4th/7th via Metal Blade Records in Europe!

More details on ‘Circle Of 8’ soon!