Metal Hammer Magazine has posted the exclusive premier of the lyric video for ‘We Are,’ the All-Star charity single from REVOLUTION HARMONY featuring Serj Tankian, Ihsahn and Devin Townsend.

The single, which will go on sale July 18th with proceeds going to Buskaid, was debuted last week on Kerrang Radio to widespread acclaim. The debut of the lyric video gives fans a chance to gain a deeper understanding of the song’s message.

Metal Hammer has posted the lyric video at this location.

Revolution Harmony, the brainchild of British music lecturer/journalist Ray Holroyd, has announced the July 18th release of its debut All-Star charity single, ‘We Are.’

Composed, arranged, programmed and produced by Ray Holroyd in Vancouver, the complex international studio project was recorded in North America, England, Norway and New Zealand, then mixed by Rohan Onraet (Slipknot, Machine Head) in London, and mastered by Ted Jensen (Green Day, Muse) in New York. The song features vocals from Serj Tankian (System Of A Down) and Ihsahn (Emperor), as well as guitar solos by Devin Townsend, along with Stefan Loh (We Claimed Sentience Once) on guitars, and additional vocals from the young up-and-coming UK singer Abbie Johnson.

The lyrical theme in ‘We Are‘ is based on the concept behind Revolution Harmony, which is essentially the belief that musical harmony has the power to inspire a revolution towards societal harmony. The single is dedicated to Nelson Mandela and the memory of Lucky Dube, regarded as South Africa’s Bob Marley, and will be released worldwide on Mandela Day (18 July), with all proceeds donated to Buskaid, a charity that provides free music lessons and instruments to children in the townships of South Africa. 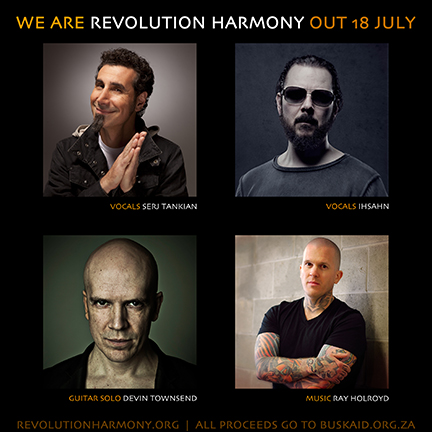