It has been a while since we have announced bands for METALFEST Loreley! We`ve been working hard within the last weeks to book the best possible acts for you! Now we are proud that we can present you the following additions on the billing:

The ultimate thrash metal heroes SLAYER and TESTAMENT plus the US steamroller DOWN – this awesome artists will hit the stage in St. Goarshausen in 2013! See them and acts like CHILDREN OF BODOM, SUBWAY TO SALLY, ARCH ENEMY, PARADISE LOST, JBO, WINTERSUN, EQUILIBRIUM and many more at Germany`s most enticing and beautiful festival area.

June 20th to 22nd it`s time again – the gates to headbanger`s heaven will swing open once more and over 30 carefully selected bands that belong to the biggest, most exciting and heaviest names of the genre await you on three festival days!

Watch out! Further highlights will be announced on January 18th!

Get your tickets now! The three-day festival pass (including camping) is only 79 €, and for 89 € you can call the fan pack including the festival pass, a festival shirt and a NoiseArt CD of your choice your own!!! Check out: www.hardticket.eu 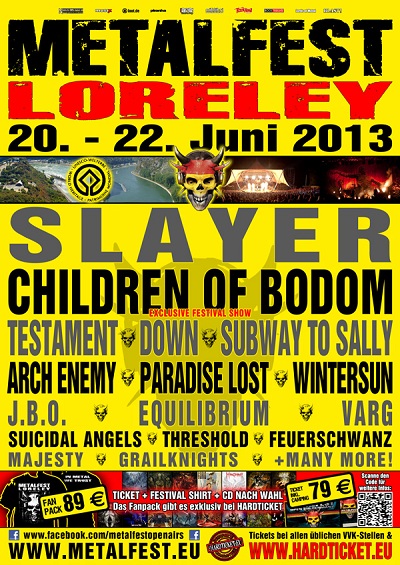