Midnight Masses, the band of Autry Fulbright (accompanied by Jason Reece) from …And You Will Know Us By The Trail Of Dead, are pleased to announce their debut album ‘Departures’ will be released on the 21st July 2014 in Europe and July 22nd 2014 in the US. The cover art for the album can be seen above, and the track- listing is as follows: 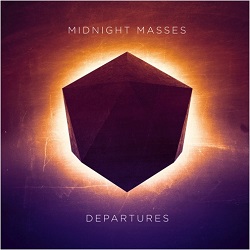 Autry comments:
“Midnight Masses is my longest standing creative project and I’m privileged to have my bandmates in …Trail of Dead occasionally join in as well as have so many other friends contribute. What started off as a therapeutic way for me to reflect and document the death of several family members and friends has turned into a musical endeavour that draws not just from grief, but the recognition of life. I’ve been heavily influenced by many musicians and visual artists along the way, and intend to convey the story of loss, self-discovery, and hope that permeates throughout.”

The band have recently released a special behind the scenes look at the making of album, including some short snippets of music.
Check that out here: http://youtu.be/J-nE_3jRwBU

Midnight Masses was started in the spring of 2008 by Autry Fulbright and Jason Reece shortly after the death of Autry’s father. The sudden loss compelled him to seek solace through music and travel with his friends. One of his friends was Gerard Smith of TV on the Radio who had recently begun documenting various Brooklyn musicians in his home studio. Midnight Masses quickly grew from a bedroom project to a multi-media collective with a revolving cast of musicians, filmmakers, and visual artists with Jason Reece contributing when not occupied with …And You Will Know Us By The Trail of Dead.