New Jersey’s MIDNITE HELLION is proud to announce the release Bitchin’ At Champs! 11-15-2013 on Contaminated Tones as part of the label’s official live bootleg series, exclusively on cassette.  With a layout done in old school cut-and-paste DIY fashion, the six-track cassette captures MIDNITE HELLION blazing away on stage. 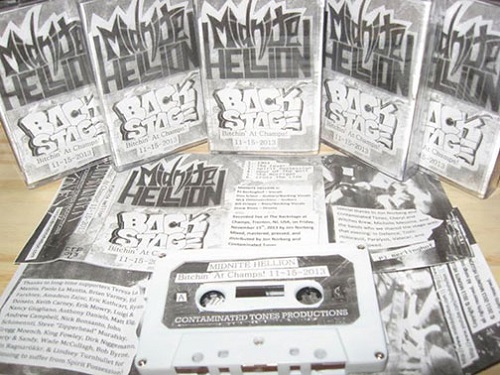 Bitchin’ At Champs! 11-15-2013 Track list:
Side A:
1903
The Fever
Spirit Possession
Hour of the Wolf
The Morrigan
Cross the Line
Side B:
Post-show Interview

The band’s recently released 7″, limited edition vinyl single, Hour of the Wolf is also available on Witches Brew Records. The 7″ and more can be ordered directly from the band at www.midnitehellion.com.

MIDNITE HELLION is currently hard at work on material for a new full-length album and will hit the studio next month to begin recording for a summer 2014 release date. The band has been confirmed for the 2014 Ragnarökkr Metal Apocalypse, set for April 4 & 5 at Reggie’s in Chicago, Ill. For fest details, visit www.ragnarokkrmetal.com.