The brandnew MILKING THE GOATMACHINE video clip “Ace of Spades” is now available on www.metal-hammer.de! The track is a cover version of the world-renowned Motörhead song.

Furthermore the band has unveiled the tracklist and the album cover of their forthcoming album “Stallzeit” which will be released on March 1st 2013! Here is the track listing: 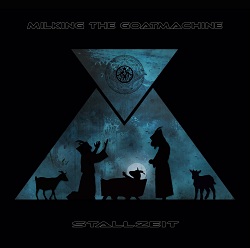 With „Stallzeit“ the band sets new standards. An amazing concept album. The killer production really nails it to the point, it´s a hard-slamming, riff-sh*tting, grind shouting record with a massive wall of guitars, goatdowns, mosh parts and ferocity. A true fest of grind/death with a twist of nonsense and craziness, the trademark of them goats.

The band comments:
„The album will be, like all other MTG albums, a concept album. The topics are the experiences that we`ve made on your planet and how we narrate everything to our Goatlord on planet GoatEborg…it`s effectively  a goat diary! The song “When a Goat loves a Woman” for example describes the difficulty when you receive a phone number from an earth-doe and you try to dial the number with hooves on your touchscreen smart phone… Musically we stayed true to ourselves and we grind down everything that we are up against.“

2013 the band is already confirmed for EXTREMEFEST Germany and BEASTIVAL Germany. Plus, the goats will be playing a few selected release shows around the album release.

Hot News – Triptykon: To Be Touring As Part Of Hatefest 2011