The second in a three part series of digital releases that collectively make up Album of Man, Man :: Intrinsic conceptually picks up where its predecessor, Man :: Instincts, left off. Where the first release was an exploration of what it means to be human, Man :: Intrinsic looks at the inherent nature of mankind.

Just prior to the release of Man :: Intrinsic, MONSTERWORKS will perform live for the first time since March of this year when they play at The Unicorn in London on October 13th.Sweden’s Panic Area and Doomsayer will be playing as well. For details visit www.facebook.com/Monsterworks.

Man :: Instincts is still available for download at www.MortalMusic.bandcamp.com. 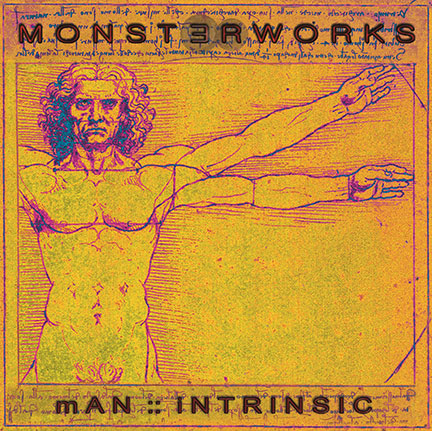 “Man: Instincts is at times bizarre, at times incomprehensible, and at all times utterly interesting. The experience gives you so much in such a short amount of time that it’s absolutely worth the ride, even if you only manage to take in half of everything available.”
– BloodyGoodHorror.com

“Monsterworks have no boundaries and flip the bird at the rule book.” [8/10]
– WithGuitars.com

“With powerful lyrics that doubt one’s belief, the band’s music is far more than harmony and technique, for it might make a person think and confront himself with things he may consider undoubtedly true.” -Metal Shock Finland

In the course of its existence MONSTERWORKS has been responsible for albums as farfetched as a metal space adventure concept album in two parts (Spacial Operations – 2007 and Singularity – 2009), but more recently has explored philosophical territory (The God Album – 2011) and an approach to recording that mostly relies on “old-school” technology, i.e. 24 track, 2-inch tape, like the classic albums the band grew up with. It was time to take a step back and rediscover the grit that made metal great, rather than the over-polished mechanical production that is often evident in modern releases.

Stylistically the band has always been difficult to pin down, at one moment death metal, in another stoner rock, then back to thrash; but the challenge to the listener is intentional and somehow in the end it works (in the context of heavy metal, which is the only essential influence). What is important is that the music does not switch between styles for the sake of it, nor to show off; it is just what feels right in the moment.

MONSTERWORKS has, possibly to its own detriment, never followed trends or towed the line; preferring to forge its own path in the continually evolving world of heavy metal. In this respect it has always stayed true to its mission statement:

IMAGE IS NOTHING; METAL IS EVERYTHING.