MORGENGRAU formed in 2010 and self-released their debut, Extrinsic Pathway, earlier this year. The album has received great reviews for its vicious death metal blending European and American influences from classic ’90s bands, including Morbid Angel, Slayer, Pestilence, Asphyx, with original songwriting and a voice purely the band’s own. MORGENGRAU has been entirely self-distributed and self-promoted thus far; entering into the Unspeakable Axe/Dark Descent Records fold, they are now poised to inflict vastly greater damage worldwide.

Vocalist/guitarist Erika Morgengrau has this to say about the signing: “We are very pleased and honored to be working with such a professional and respected label. This will allow us to move to the next level with our music and shall certainly inspire us to produce a second album that buries the first!”

The second MORGENGRAU album is expected to begin recording next summer for release in mid to late 2014. Extrinsic Pathway is available at morgengrau.bandcamp.com.

“Into the Abyss, into the Non, where everything and nothing exists
Shades await birth or destruction
Standing baffled, the penitent wail while the unrepentant take up swords
Over all, He prevails…”

Come walk the Extrinsic Pathway with Morgengrau. Hailing from Austin, Texas, Morgengrau is dedicated to the craft of classic death metal. Since the band’s inception in 2010, they quickly established themselves as a formidable live act, garnering particular attention due to being fronted by ex-Ignitor frontwoman, Erika Tandy, and former Manifestation drummer, Reba Carls. Both women are well known in the Texas scene for their fierce performances, with Tandy having fronted several other well known bands of various genres, including Autumn Tears. The band focuses conceptually on death worship in all its forms: war, occultism, horror and science. Their debut album, Extrinsic Pathway was recorded at Amplitude Media and mixed and mastered at Endarker Studios in Sweden by the mighty Devo from Marduk. 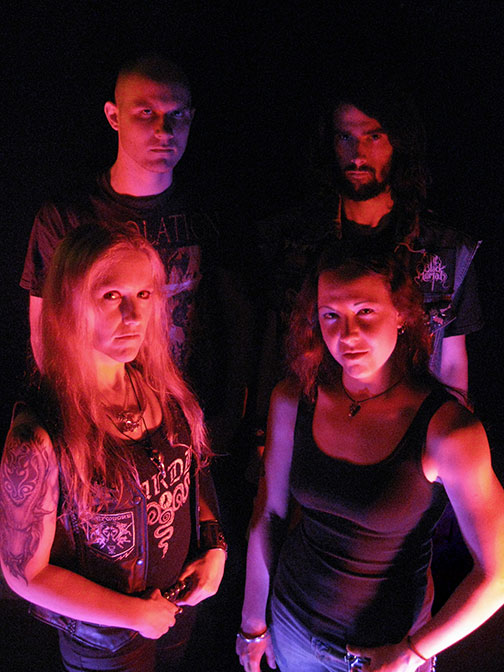