Relapse Records is extremely proud to announce the imminent release of Cursed to See the Future, the new full-length from Brooklyn’s heavy-music outfit MORTALS. Formed in 2009, the veteran musicians have moved from their metallic punk beginnings into a much heavier, doomed amalgam of black metal and sludge that worships Celtic Frost and Coffins, as often as it hails Buzzoven, Goatsnake, and Goatwhore. With four solid releases under their bulletbelts (including 2012’s savage Death Ritual EP), MORTALS are poised to deliver their most furious outing to date.

Cursed to See the Future will see release via Relapse Records on July 8th in North America, July 4th in Germany, Benelux, Finland and on July 7th in the UK and the rest of the world. Preorders are now available here.

Listen to the punishing opening track, View From a Tower, on Soundcloud and on Youtube. 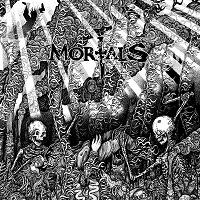 1. View From a Tower
2. Epochryphal Gloom
3. The Summoning
4. Devilspell
5. Series of Decay
6. Anchored in Time