As recently announced Metal Mind Productions will release the fourth studio album by Mr Gil, a project led by Mirek Gil (ex-Collage, Believe). Their new album entitled „I want you to get back home” is scheduled for release on June, 4th in Europe and July, 10th in USA (via MVD). And today the band reveals the artwork and tracklist of the album. 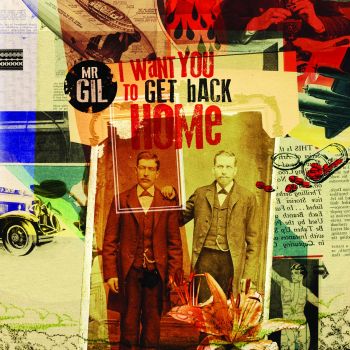 The beginning of Mr Gil dates back to 1998. It was then that Mirek Gil, the guitarist of the progressive group Collage, decided to present his artistic abilities on his first solo album “Alone”. He invited his fellow musicians to this project: Olaf Łapczyński on vocals, Krzysztof Palczewski on keyboards, Piotr Witkowski on bass and Vlodi Tafel on drums. The most outstanding track on that album was undoubtedly the song “Beggar”, which to this day is often performed during the concerts of groups led by Mirek Gil. After the success of “Alone”, the band chose to keep silent for the next 10 years. In 2009, the idea of reactivating the project was born. The band released “Skellig” in 2010, this time with Karol Wróblewski (Believe) on vocals. Also in 2010, the band released the album “Light and Sound”. And now the band return with their fourth studio album entitled „I Want You to Get Back Home”. As the band say: „You can’t plan everything. And especially you cannot control what comes out of the human soul. Because it is the need for honesty, friendship and passion that grew into the idea of Mr. Gil’s new album. Friends decided to meet again in the studio to complete their story…” And this story started with their album „Light & Sound”, when the band’s new improved line-up crystalized: Mirek Gil (guitars), Karol Wróblewski (vocals), Konrad Wantrych (piano, keys) and Paulina Druch (cello). Their album „I Want You to Get Back Home”, recorded in the same line-up, brings 9 brand new tracks. „It’s like coming back home, like a return to peace and warmth” says Mirek Gil. „In our new music, there is a lot of friendship and that was the main idea behind it. Is there anything more important, more beautiful than this? We have managed to learn more about each other. It is in each other that we have found that home”.

Hot News: Mr Gil – Listen to another track from the forthcoming album