MYSTIC PROPHECY announced in February 2013 that they’re going to enter the studio in early March. Soon after, the band’s new masterpiece got a name: “Killhammer“.

The new album was recorded at the Prophecy and Music Factory Studios with singer R.D. Liapakis once again sitting in the producer’s chair. Fredrik Nordström (Hammerfall, In Flames, Arch Enemy) is responsible for the mix at the Studio Fredman in Sweden.

The band has now revealed the album’s cover artwork, created by Uwe Jarling – one of the most talented fantasy graphic designers!

R.D. Liapakis comments on the album as follows:
“After 12 years and 7 albums we are ready to release our 8th album. ‘Killhammer’ will be a metal masterpiece with a wall of sound, loud guitars straight in your face and without compromises!” 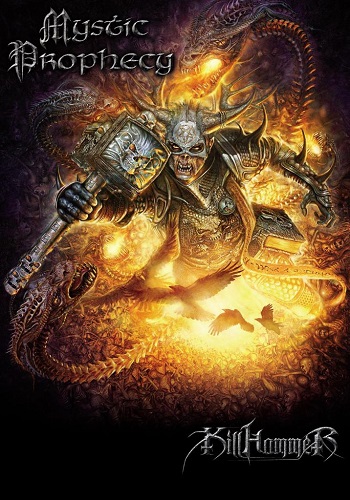 If you want to see MYSTIC PROPHECY live this year, you can do so at two dates in Germany:

The album will be available as jewel case, limited edition A5 digipak w/ a bonus live DVD as well as limited vinyl LP in gatefold cover.

MYSTIC PROPHECY’s “Killhammer” will be released on September 27, 2013 via Massacre Records!