The audio portion of this hellish and genre-defining piece of black metal history can be heard in full at the link below: http://www.decibelmagazine.com/featured/streaming-mystifier-wicca/

The deluxe CD/DVD digipak reissue of Wicca, complete with remastered and restored tracks, 16-page booklet and live DVD will be available through Greyhaze Records on 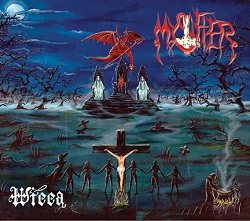 MYSTIFIER is currently making plans for the “Old Hymns for World Domination” World Tour 2014 that will see the band playing material off of Wicca and its 1993 follow-up, Goetia. The tour will include stops at Norway’s Inferno Festival as well Germany’s Legacy Open Air. Confirmed dates are as follows: