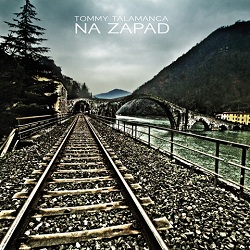 Sadist Mastermind Tommy Talamanca‘s upcoming solo album “Na Zapad” is set for release worldwide April 8th, 2013, via Nadir Music. The album has been entirely arranged, performed, mixed and produced by Tommy Talamanca himself at Nadir Music Studios (Italy) during last year. Not the usual guitar-oriented album people would expect from an heavy/rock guitar player like Tommy, “Na Zapad” is a psychedelic mix of progressive rock and world music instead, where both the acoustic and the electric hearts come together. The album is preceded by the video of the song “Vostok” (Восток).