NACHTGESCHREI have announced the first single off their upcoming album “Aus Schwärzester Nacht“!

Besides the song “Sirene“, the digital single will also feature an acoustic version of the song “Ardeo” with Martin LeMar, the band’s new singer, on vocals.

The band sees the song “Sirene”€ as a perfect choice for the first single: It has a driving groove, is catchy and haunting. Just like the mythological creature, the song will put a spell on the listener. 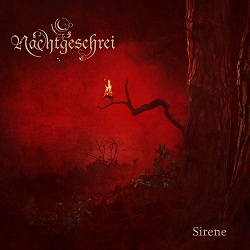