Famed artist and visual effects director and driving force behind the all-star death metal project that bears his name, NADER SADEK has joined forces with MetalInjection.net and Decibel Magazine to premier two videos from the DVD portion of his live audio/visual experience entitled Living Flesh.

Videos for “Sulffer” and “Nigredo in Necromance,” both filmed live during a 2011 performance at Santos Party House in Manhattan, are now streaming at the links below.

Watch “Nigredo in Necromance” at DecibelMagazine.com.

On February 27th, NADER SADEK will self-release the live CD/DVD Living Flesh, which captured the first ever live performance of the 2011 release In The Flesh. Details on the release can be found below and pre-orders are being taken at www.nadersadek.com.
Capturing the inimitable stage presence of a unique collaboration of death metal and black metal giants, Living Flesh offers the heavy, haunting soundtrack of a society ever more soaked in the reanimated, decomposed bio-matter we know as petroleum. The November 20, 2011 show featured the original line-up of musicians from the In the Flesh record, as well as two new performers. The original line-up consisted of Flo Mounier (CRYPTOPSY); Rune Eriksen (AURA NOIR, AVA INFERI, ex-MAYHEM); Novy (ex-BEHEMOTH and ex-VADER); and Steve Tucker (ex-MORBID ANGEL in his first and last live appearance for this project. Those greats are joined by Sean Frey as guest live guitarist and Carmen Simoes on backing vocals.

Living Flesh also brings you photos of that evening, demonstrating why NADER SADEK has been a favorite set-designer for the likes of SUNN O))) and MAYHEM. Nodding to the petroleum theme, the Egyptian artist brought the drums to the front of the stage as a metaphorical engine driving the music, while the disembodied voices of the singers emerge from the rear of the stage, behind the guitars and bass. Sadek himself takes the stage to baptize small, gut-like objects in a black tar-like liquid and throw them into the crowd.

The songs themselves differ from the original studio album arrangements. Not only are they played at a much higher speed, but have been extended to allow the audience to sink into and absorb the relentless riffs. Carmen Simoes’ operatic voice enhances the melodies and darkens the atmosphere. The live show also features one track that does not appear on the studio album: Flo Mounier’s extraordinary drum solo that shifts from brutal mechanical noise to rhythmic musical patterns, paralleling the overlap of man and machine charted by Sadek’s petroleum-based project.Living Flesh will also be released in a single, unique vinyl edition. Consisting of a very special packaging and extra content, this piece is limited to one exclusive copy worldwide. Details to be announced. 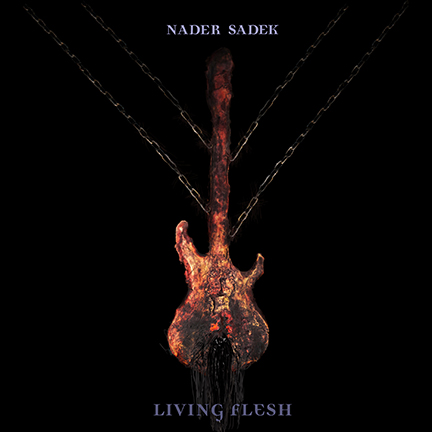