German Progressive Death Metallers NAILED TO OBSCURITY have posted a teaser for Opaque, the band’s forthcoming sophomore album and first to feature new vocalist Raimund Ennenga. Check out the teaser at this location.

The follow-up to the band’s 2007, self-released debut, Abyss, Opaque will be released on September 20th in Germany, September 23rd in the UK and the rest Of Europe and October 1st in North America through Apostasy Records. Opaque was produced together with Lasse Lammert at LSD-Studio in Lübeck, Germany. Artwork comes courtesy of Ben Borucki (Irrleuchten).

The band comments, “By suppressing our deepest feelings and by concealing our fears and emotions we mask our inner self. This topic runs like a red thread through our new album. No other title would fit the content better than Opaque. The artwork, which was done by Ben Borucki, captures this atmosphere perfectly and creates a symbiosis between the music, the lyrics and the art.” 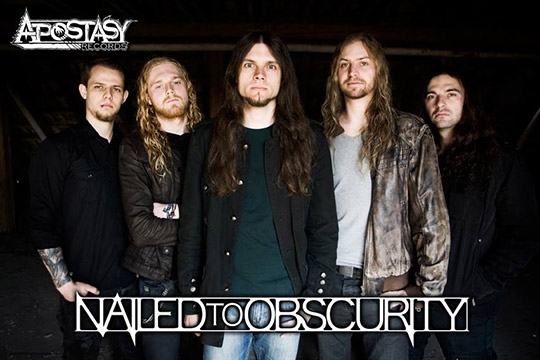 Since 2005, the name NAILED TO OBSCURITY has stood for an inventive mélange of hard riffs, atmospheric melancholy and a distinctively unique sound. The band has already displayed all of these qualities on their debut album, Abyss, recorded at the Soundlodge Studio with producer Joerg Uken (God Dethroned, Izegrim a.o.).

After the release of their debut, NAILED TO OBSCURITY focused their energies on progressing as a band and elevated themselves to the next level through numerous shows and their consistent pursuit of musical refinement. The results have clearly paid off with their newest masterpiece, Opaque.